The visit to St Mary Redcliffe, Bristol on Saturday 13 April was a wonderful opportunity to get to hear and play this famous Harrison organ. I had already heard it in Thomas Trotter’s re-opening recital after the rebuild and also from a good seat in a full-to-busting Masonic Christmas service (no, I don’t know how to do the shaky-hand thing!), so it was good to experience it in a more relaxed setting. Andrew Kirk welcomed us and gave a whistle-stop (!!) tour of the instrument before giving a magnificent rendering of the Guilmant ‘Grand Chœur.’ Then it was open console. Many members played, sometimes with Andrew’s assistance on registration. It was noticeable that several of our more senior members really took to the organ and gave some fine performances, thus validating the comfort of the console. Andrew rounded off with the last movement of the Elgar Sonata, demonstrating a wide range of colour and power. 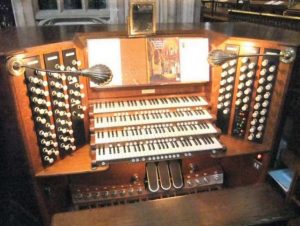 As to the organ itself, it is of Rolls-Royce quality that inspires some reverence when sat at the luxurious four manual console (which, of course, has all the current playing aids). First impressions are of impeccably smooth voicing in the best Harrison tradition and a truly magnificent and pervasive 32ft pedal Open Wood. The chorus reeds are very smooth which adds to the sense of grandeur. The building and the organ’s location within it require consideration from the organist as the acoustic is not that generous for so large a church. The great and choir (unenclosed) sections face each other across the chancel N and S with a small swell named solo/echo (to Dulciana Mixture and Oboe) on the S, pedal stops are also in these cases and the Tuba is in the S case. As a result the tone of these divisions is focussed across the choir rather than down the nave.

Hearing it on the two previous occasions, I thought that the power was barely sufficient to lead a large congregation in the nave. The unenclosed choir has some delicious sounds as does the small swell with its gentle strings, accompanimental flutes, and a small chorus. The great appears quite large, but despite the addition of a big quint mixture to the original tangy Harrison ‘Harmonics’, it really does not carry down the nave. Harrisons must have realised this, for they provided an enormous swell division on high pressure in a chamber on the corner of thenorth transept and choir aisle, with shutters, controlled by separate pedals, opening towards the chancel and N transept. Everything in this division is pushed very hard, from the harmonic flutes to a powerful and rare solo-style string chorus, diapason chorus, and probably the largest swell reeds in Christendom, down to the enclosed 32ft reed. Fortunately the swell shutters are very effective and can tame this division as needed. Once you are up to full swell, there is not much the great can add, and certainly the tuba is no climax.

The organist has a challenge in managing the dynamics of the two swell divisions, with the solo/echo played from the top manual and the swell from the usual third one. It must often be necessary to couple the solo/echo down to a lower keyboard and so general pistons will be a boon. The position of the console is such that the organist gets the big swell very much in the left ear! Careful registration can certainly yield some wonderful romantic sounds however, and it is a delight when playing the appropriate music. Since the rebuild the organ is now completely reliable, has negligible wind leaks and a good responsive action. Anyone who missed this visit missed a real character of an organ.   Der unruhestiftende Erzahler.